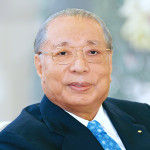 Founder, Soka Schools which include universities in Japan and the USA, Soka University

Daisaku Ikeda, third president of the Soka Gakkai Buddhist organization in Japan and founding president of the Soka Gakkai International (SGI), is a Buddhist thinker and leader, peacebuilder, prolific writer and poet, educator, and proponent and practitioner of wide-ranging dialogue. Ikeda’s dialogue partners have included Arnold Toynbee, Mikhail Gorbachev, Nelson Mandela, Rosa Parks, Linus Pauling and other influential figures in the promotion of a culture of peace and mutual understanding, including representatives of different faiths. As third president of the Soka Gakkai and founder of the SGI, Mr. Ikeda has developed and inspired the largest, most diverse international lay Buddhist association in the world. Based on the 700-year-old tradition of Nichiren Buddhism, a form of Mahayana Buddhism based on the Lotus Sutra, the movement is characterized by its emphasis on value creation (Soka), with each individual finding value in their unique path while contributing to humanity. Mr. Ikeda has stressed that the inner motivated change of even a single individual, known as “human revolution,” can change the world. He has founded a number of cultural, educational, and peace research institutions, including the Ikeda Center for Peace, Learning, and Dialogue, the Toda Peace Institute and Soka University of America. All of these institutions share a commitment to the Soka values of peace and humanism, but function as independent organizations. Mr. Ikeda has also authored peace proposals offering solutions to global issues based on the philosophy of Buddhism every year since 1983.