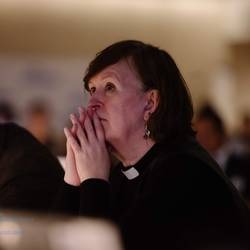 Bonnie received her MA in pastoral theology from Heythrop College, University of London. Earlier she took part in a theological exchange at al-Azhar University in Cairo for the Anglican Communion’s al-Azhar Dialogue. Bonnie currently holds office on the Executive Committee of the World Congress of Faiths and is priest in charge of a church in the Scottish Episcopal Church, where she is also a member of the province’s Inter Faith Relations Committee. She also serves on the Churches Together in Britain & Ireland Inter-Faith Theological Advisory Group. Bonnie has considerable experience in inter-religious dialogue, focusing in particular on dialogue with Shi’a Islam following a period of study in Qum, Iran. She has worked on occasion with the World Council of Churches in Geneva, and more recently the United Nations strategy for ending incitement to genocide.