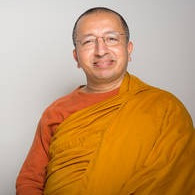 The Venerable Dr. Deegalle Mahinda is a Reader in the Study of Religions, Philosophies and Ethics at the College of Liberal Arts at Bath Spa University in the United Kingdom. Dr. Deegalle is a graduate of Harvard University and the University of Chicago and has held professorships at McGill University, Canada, and Colgate University, USA, and conducted post-doctoral research at Kyoto University, Japan.

He is the author of Popularizing Buddhism: Preaching as Performance in Sri Lanka and editor of several volumes including Buddhism, Conflict and Violence in Modern Sri Lanka. His current research concentrates on minority issues, ethics of war and violence and religious extremism.

Dr. Deegalle’s exposure to interreligious dialogue goes as far back as the early 1980s to his undergraduate days at the University of Peradeniya. In the last three decades, he has been engaged in many international dialogue forums with Catholics, Protestants and Jews and recently with Islamic initiatives. He is the former Editor in Chief of the journal Buddhist-Christian Studies published by the University of Hawaii Press. He contributes regularly to the BBC1, BBC World Service, Aljazeera and Buddhist TV. As Executive Director, Dr. Deegalle heads the Research Centre for Buddhist Studies located in the vicinity of University of Peradeniya, Sri Lanka that promotes the academic study of Buddhism and facilitates close interaction with ethnic and religious minorities.

BUDDHIST MONKS AS AGENTS OF PEACE: TRAINING IN INTERRELIGIOUS DIALOGUE

This is a capacity building project in the intra-dialogue. The project concentrates on the Buddhist community with the objective of providing training in interreligious dialogue for Buddhist monks. It will introduce training exercises for a selected group of young Buddhist monks of the University of Peradeniya, Sri Lanka (or Sri Lanka Buddhist Academy). The purpose is to enable them act effectively as agents of peace. Its primary aim is to train and equip 20 Buddhist monks of University of Peradeniya with the necessary knowledge and skills to become trainers and facilitators of Interreligious Dialogue and communication