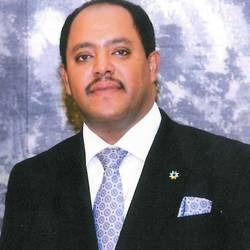 Ambassador Mussie Hailu is a peace and interfaith activist who is working at national, regional and international levels for peace, reconciliation, interfaith harmony, human dignity, environmental protection, compassion for animals, disarmament, the control of the proliferation  of small arms and light weapons in Africa.  He is active for world citizenship, promoting throughout the world the teaching of the Golden Rule which says "Treat others the way you want to be treated" to build right human relationships and international cooperation for the good of all mankind and mother Earth. He considers himself as a Citizen of the World and strongly believes in the interdependence of human beings and celebrates cultural diversity, seeing the differences in race, ethnicities, religions, politics, and nationalities as important elements of the one and indivisible humanity. He has served as Ambassador at large and worked with many national, regional, international and intergovernmental organizations including the United Nations. He facilitated the working partnership between KAICIID and the African Union.  He is founding member of URI and currently serving as URI Global Envoy & Representative to the African Union and United Office in Africa & Geneva. He is also serving as the Regional Director of URI - Africa. Biography as at 14.10.17