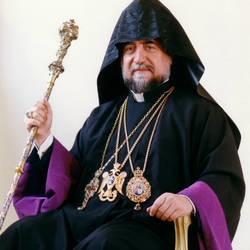 Patriarch, The Catholicosate of the Great House of Cilicia

Born in 1947, in Beirut, Lebanon, His Holiness Catholicos Aram I studied at the Armenian Theological Seminary, Antelias, Lebanon and the Ecumenical Institute of Bossey, Geneva, Switzerland. He received his M.Div. from the Near East School of Theology, his S.T.M. jointly from the American University of Beirut and Near East School of Theology, and his PhD from Fordham University in New York. He also holds several honorary degrees. His major areas of specialization are philosophy, systematic theology, and Near Eastern church history. Catholicos Aram I was ordained as a celibate priest in 1968 and obtained the title of Vartabed (Doctor of the Armenian Church) in 1970. In 1979, after serving for one year as Locum Tenens, he was elected Primate of the Armenian Orthodox Community in Lebanon; the next year he received episcopal ordination. In June 1995, His Holiness was elected Catholicos (the Head of the Church) by the Electoral Assembly of the Armenian Catholicosate of Cilicia (35 clergy and 115 lay representatives), and was consecrated one week later. Called to serve as Primate of the Armenian Community of Lebanon during the Lebanese Civil War, His Holiness reorganized parishes and schools, restructured and reactivated church-related institutions, and renewed community leadership. As a strong supporter of inter-religious relations, dialogue and co-operation, His Holiness Aram I has played a significant part in promoting common values, mutual understanding and peaceful co-existence among religions. In this context he worked hard as Primate to create tolerance and build mutual confidence between Christian and Muslim communities during the most critical times of Lebanese Civil War. He made frequent reference in his writings and public interventions to the vital importance of dialogue and collaboration among the living faiths of the world and initiated a number of inter-religious dialogues and took active part in important inter-religious meetings on regional and international levels. He also played an instrumental role in re-organizing the Christian-Muslim Committee of the Middle East Council of Churches, and in preparing the International Inter-religious Conference organized by the World Council of Churches (June 2005). He organized in Antelias a high level meeting of the representatives of religions of Asia and the Middle East (January 2007) and gave lectures at inter-religious meetings, universities, and public events in different parts of the world. His Holiness is an honorary President of the World Religions Museum Foundation, and World Religions for Peace international organization.