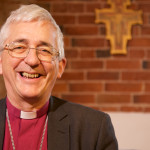 The Right Reverend Dr Michael Ipgrave was ordained Deacon in 1982 and Priest in 1983 in the Dicoese of Peterborough. In 2004, he became Archdeacon of Southwark after over 20 years of ministerial work in Leicestershire and Japan. Before this, he was the Inter Faith Relations Adviser to the Archbishops’ Council and Secretary of the Churches’ Commission on Inter Faith Relations. He was presented with the OBE in the New Year’s honors list in 2011 for his contributions to inter-faith relations in London. Dr. Ipgrave was the Area Bishop of Woolwich, in the Diocese of Southwark from 2012 to 2016. He was enthroned as the 99th Bishop of Lichfield in 2016. He also serves as the chair of the Council of Christians and Jews, and is Co-Chair of the Anglican-Lutheran Society and of the Church of England’s Mission Theology Advisory Group. Bishop Michael has multiple publications on inter-faith issues and on the topic of religion and human rights. He has edited 6 volumes on Christian-Muslim relations, is the author of Trinity and Inter Faith Dialogue (Peter Lang, 2003), and has contributed to around 30 journal articles and book chapters.