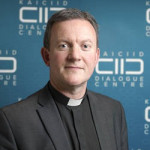 From 2014 to 2018, Canon Mark Poulson has served as Secretary for Inter-Religious Affairs to the Archbishop of Canterbury and National Inter-Religious Affairs Adviser for the Church of England. Prior to this Mark was the Vicar of St John’s Church, Southall for 11 years, where he and his family still live. Southall is an extraordinarily diverse area of West London with flourishing relationships across different faiths and communities, and Mark has been instrumental in fostering these relationships. He has also been involved nationally in the Church of England’s Presence and Engagement Programme as a long-standing member of its Task Group, and sits on the Board of the Church’s successful partnership with Government, the Near Neighbours Project. He is the Chair of Trustees of the Kings Centre, Southall – an emerging centre of training in faiths and cultural awareness.