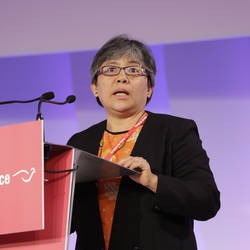 A. Elga J. Sarapung was born in Gorontalo, on August 1st, 1961. She studied theology, and specialized in the field of Missiology and Ecumenical (Oikoumene), which was developed specifically for the study of "Interfaith Relations and Dialogue", as well as "Religions for Justice and Peace", "Conflict Resolution" and "Peace Building", “Human Rights and Democracy”, “Lobby on FoRB issue”, and is mainly related to "interfaith" and "religion and state” issues in the Philippines and in Indonesia. She is active in the Movement "Religions for Justice and Peace" at the National and international levels (National Interfaith Network, Asian Conference of Religions for Peace/ACRP and Religions for Peace International/RfP International), and specifically for Papua. Sarapung has studied and graduated from different institutions: the Faculty of Theology UKIT Tomohon, North Sulawesi (1985), the Ecumenical Institute, Bossey, University of Geneva, Geneva, Switzerland (1986/1987), and Groningen University, Netherlands (1988/1990). She was ordained as a pastor at the Indonesian Protestant Church in Gorontalo (GPIG) in 1986. Since 1993, she has worked at the Institute of Interfaith Dialogue of Indonesia (DIAN Institute/ Interfidei), Yogyakarta. Now, Sarapung is its Executive Director and assists in the service of the Protestant Church of Indonesia in the Western (GPIB) "Marga Mulia" in Yogyakarta, as well as some other organizations in Jakarta and Yogyakarta. She has been invited to facilitate many workshops, and as a speaker in Seminars, Conferences at the local, regional, national and international levels. Biography as at 17.05.18

Freedom of Religion or Belief Peace and Reconciliation