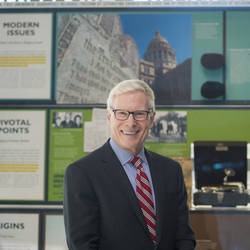 Dr. Charles C. Haynes is vice president of the Newseum Institute, founding director of the Religious Freedom Center and a senior scholar at the First Amendment Center. He writes and speaks extensively on religious liberty and religion in American public life. Haynes is best known for his work on First Amendment issues in public schools. Over the past two decades, he has been the principal organizer and drafter of consensus guidelines on religious liberty in schools, endorsed by a broad range of religious and educational organizations. In January 2000, three of the guides were distributed by the U.S. Department of Education to every public school in the nation. (See also “A Parent’s Guide to Religion in the Public Schools,” “A Teacher’s Guide to Religion in the Public Schools,” and “Public Schools & Religious Communities.”) Haynes is the author or co-author of six books, including “First Freedoms: A Documentary History of First Amendment Rights in America” and “Religion in American Public Life: Living with Our Deepest Differences.” His column, Inside the First Amendment, appears in newspapers nationwide. He is a founding board member of the Character.org, and serves on the steering committee of the Campaign for the Civic Mission of Schools. He chairs the Committee on Religious Liberty, founded by the National Council of Churches. Widely quoted in news magazines and major newspapers, Haynes is also a frequent guest on television and radio. He has been profiled in The Wall Street Journal and on ABC’s “Evening News.” In 2008, he received the Virginia First Freedom Award from the Council for America’s First Freedom. Haynes holds a master’s degree from Harvard Divinity School and a doctorate from Emory University. Biography as at 16.10.18 The above narrative biography is sourced from http://www.newseuminstitute.org/experts/?bio=46

Freedom of Religion or Belief