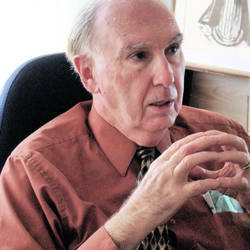 Leonard is a Professor of Catholic Thought and Interreligious Dialogue in the Religion Department of Temple University, where he has taught since 1966. At Temple, and as a visiting professor at universities around the world – including Graz, Austria; Tübingen, Germany; Fudan University, Shanghai; and the University of Malaya, Kuala Lumpur – he has mentored a generation of U.S. and international scholars in the work of interreligious dialogue. He has a Licentiate in Sacred Theology from the University of Tübingen and received his Ph.D. in History from the University of Wisconsin; he also holds honorary doctorates from St. Norbert’s College and LaSalle University. Leonard has published/edited more than 200 articles and 75 books, including: Jewish‑Christian‑Muslim Dialogue (1978); Religious Liberty and Human Rights (1986); After the Absolute: The Dialogical Future of Religious Reflection (1990); A Bridge to Buddhist-Christian Dialogue (1990); Muslims in Dialogue: The Evolution of a Dialogue over a Generation (1992); Jesus Was a Feminist (2007).