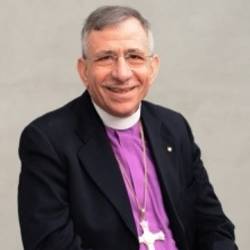 Founder and member, core group of Council of Religious Institutions in the Holy Land

Bishop Dr. Munib Younan was is the former President (2010-2017) of the Lutheran World Federation (LWF), a global communion of Christian churches with 145 member churches in 79 countries representing more than 70 million Christians. In his capacity of president of the LWF the bishop signed with his Holiness Pope Francis I the historical reconciliation between the Catholic and the Lutheran Churches.  Also in his tenure as a president of LWF, he Initiated with the UNCHR the document of “Welcoming the Stranger: Affirmations for Faith Leaders”. This document was signed in the General Assembly of Religions for Peace in Vienna 2013 by all attending religious leaders. He was also the president of FMEEC and still provides leadership for the ecumenical Patriarchs and Heads of Local Christian Churches in Jerusalem, as well as for the Council of Religious Institutions in the Holy Land (CRIHL). His term as acting Bishop of the ELCJHL was from December 1998 – January 2018. Bishop Dr. Munib Younan was educated in both Palestine and Finland and he has been active in numerous faith organizations, such as the Middle East Council of Churches (MECC), The Lutheran World Federation (LWF) and the Fellowship of the Middle East Evangelical Churches (FMEEC). The bishop is an active member of various ecumenical and interfaith dialogue initiatives in Jerusalem that he helped found. Bishop Younan was granted the 34thNiwano Peace Prize in 2017 for his extensive work in interfaith dialogue. He was also granted the Bridge Builder Award from Georgetown University, USA. These are among the awards he has got.