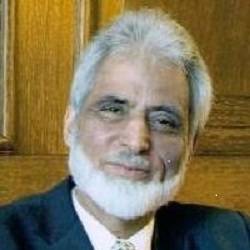 Dr. Sayyid M. Syeed is the National Director of the Islamic Society of North America (ISNA), heading up its Office for Interfaith and Community Alliances in Washington, DC. He served for 12 years (1994-2006) as Secretary General of the Indiana-based national umbrella organization, which has more than 300 affiliates all over the U.S. and Canada. Dr. Syeed was born in Srinagar Kashmir and migrated to the United States in the mid-1970s. From 1980-1983, he served as President of the Muslim Students Association (MSA) of USA & Canada and pioneered its transformation into the modern day Islamic Society of North America. From 1984-1988, he was Secretary General of the International Islamic Federation of Student Organizations (IIFSO) and traveled widely in this capacity through the former Soviet Union, Europe, Africa, Asia, the Caribbean, and South America. Dr. Syeed has also been General Secretary of the Association of Muslim Social Scientists (AMSS), a national professional organization founded in 1972. Dr. Syeed was one of the founders of the American Journal of Islamic Social Sciences (AJISS) and served as Editor and then Editor-in-Chief (1984-1994). During his tenure there, AJISS grew into a quarterly publication, and today AJISS has acquired a respectable niche in academia and is quoted with recognition in professional and scholarly research. Dr. Syeed was also Chairman of the Editorial Board of Islamic Horizons, the flagship magazine of ISNA, from 1982 to 1984 and 1994 to 2006. He has been actively involved in fostering understanding among world religions and has participated in interfaith dialogues from local to international levels in the U.S.A. and Canada. A frequent speaker at interfaith dialogues, he has served as a member of the Board of Trustees of the Council for a Parliament of the World’s Religions. In 2000, he was invited to a dialogue in the Vatican by the late Pope John Paul, and in 2008, he led the American Muslim leadership delegation to meet with Pope Benedict in Washington, Syeed served on the Taskforce for the Integration of Muslims in the American mainstream set by Chicago Global Affairs after 9/11/2001 to promote healthy ways of interaction and involvement of Muslims in the mainstream America. Dr. Syeed was instrumental in pioneering the Shoulder to Shoulder Campaign with American Muslims Against Anti Muslim Sentiment established by various Christian and Jewish denominations together in 2010. The Campaign is funded by Christian and Jewish interfaith partners and is hosted in the ISNA office on the Capitol Hill. Dr. Syeed has been involved in promoting intra-faith understanding between various schools of thought within Islam. He was instrumental in getting the Shia-Sunni Code of Honor signed by leaders of both backgrounds in front of about 12000 Muslims in Chicago. This has become a point of reference for Sunni- Shia understanding internationally. He invited the former President Khatami of Iran to address the ISNA convention in Chicago in 2007, an unprecedented event that had positive implications for bringing the two communities together. Dr. Syeed is a frequent speaker at Sunni as well as Shia Islamic centers and conferences. Syeed studied at Indiana University Bloomington where he earned his doctoral degree in Sociolinguistics in 1984. His dissertation was published in 1985 by the Linguistics Club of Indiana University. In recognition of his contribution to inter-religious understanding and harmony, Dr. Syeed was awarded an honorary doctorate of letters by the Graduate Theological Foundation in South Bend, Indiana on May 4, 2001. He also received the 2001 Lifetime Achievement Award for distinguished service in furthering the Islamic tradition in North America and for promoting inter-religious understanding and harmony from the Catholic Heritage Foundation in Louisville, Kentucky. In 2010, Interfaith Alliance presented him with its President’s award. He was awarded Life time Achievement Award by Council on American Islamic Relations in 2013. Syeed was the first Muslim leader to be given Faith and Tolerance Award by Holy land Christian Ecumenical Foundation in Oct 2015 in Washington DC at their 17th International Conference. In announcing this year's award recipient, Sir Rateb Rabie, President and CEO of HCEF, stated: "In his words, Dr. Syeed consistently reminds us that the true legitimate tradition of the Holy Quran is built upon rights and religious freedom. However, more than just words, Dr. Syeed's actions demonstrate this principle. “ On January 5, 2002, Mr. Frank O’Bannon, the Governor of Indiana, recognized Dr. Syeed in his State of the State Address by saying that his “work to educate Americans about the Muslim faith in the wake of the September 11 terror attacks, along with [his] life’s work to encourage tolerance and racial healing has marked [him] as a great leader in Indiana.” Dr. Syeed has been invited to speak on Muslim and Islamic issues on national TV including NBC, CBS, CBN, BBC and ABC. He was interviewed on PBS on the MacNeil/Lehrer News Hour and has appeared on the “Today Show,” CNN’s “Crossfire,” and on national television stations in Turkey, Malaysia, Indonesia, Sudan, India, Pakistan, and Saudi Arabia to discuss matters related to Islam and Muslims in America. Biography as at 24.01.18