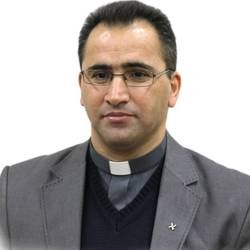 Father Ameer Jaje is a Dominican priest and Advisor to the Pontifical Council for Interreligious Dialogue and Professor at the Catholic Institute for Theology in Paris.  He is a Founding Member of the Iraqi Council for Interfaith Dialogue since 2013 and Member of the Dominican Institute of Oriental Studies. Having obtained his Bachelor of Theology from the Seminary of St. Peter and Paul in Baghdad, in 2002. With a thesis entitled “The Image of the Virgin Mary in Islam”, he obtained a Master’s Degree in the History of Religions from the Faculty of Catholic Theology in Strasbourg. He later completed a PhD in Oriental Studies (University of Strasbourg) on the subject “The Celebration of Ashura Among Iraqi Muslims Shiite”. Since 2015, Father Ameer Jaje has held the office of Director of the Arab section at the International Dominican University, having previously held the office of Director at the Baghdad Academy for Human Sciences from 2011 to 2015.  During the same period, he was also the Provincial Vicar of the Dominican Fathers in the Arab World in those years.  He was Superior of the Dominicans in Baghdad. Father Ameer Jaje taught in the faculty of Theology and Philosophy of Babel College in Baghdad (2004-2015) and at the Catholic Institute for Theology in Baghdad (2011-2015). He speaks and writes Arabic, Aramaic, and French, and speaks English and Syriac as well. Biography as at 09.06.18

Freedom of Religion or Belief Peace and ReconciliationShared Human Values