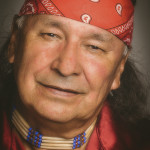 Grand-Father Dominique Rankin, a hereditary chief from the Algonquin (Anishinabe) First Nation in Canada, was born in the nomadic way of his ancestors in the forests of north-western Quebec. He was chosen when he was seven years old to succeed his father as chief and medecine-man. Once Grand Chief of the Algonquin Nation, he now devotes himself to teaching his traditional knowledge and philosophy to his peoples as a way of reconnecting them with their roots. He also shares his culture with people of all origins who are interested in learning about the culture and spirituality of his ancestors. With life partner Marie-Josée Tardif, he co-wrote They called us Savages, an autobiography relating his youth in an Indigenous residential school and the painful healing journey that followed. Member of the Order of Canada and Knight of the National Order of Quebec, he cofounded with Grand-Mother Marie-Josée Kina8at-Together and the Dominique Rankin Foundation, two non-profit organisations dedicated to reconciliation and the revival of First Peoples traditions.