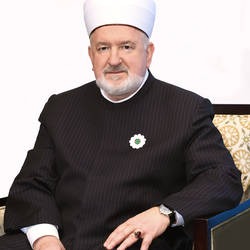 Dr. Mustafa Ceric has served as the Grand Mufti of Bosnia-Herzegovina since 1999. Ceric was educated at al-Azhar University in Cairo and received his Ph.D. from the University of Chicago. He served as the Imam of  the Islamic Center of Zagreb in Croatia, and later of the Islamic Cultural Center in Northbrook, Illinois. The Grand Mufti has received global acclaim for his work in strengthening democracy, promoting world peace, and pursuing interfaith dialogue. Ceric is the co-recipient of the 2003 UNESCO Felix Houphoet Boigny Peace Prize for Contribution to World Peace and the recipient of the International Council of Christians and Jews Annual Sir Sternberg Award for exceptional contribution to interfaith understanding. He sits on the World Economic Forum's Community of West-Islam Dialogue (C-100) and various other interfaith councils throughout Europe and the Middle East. The Grand Mutfi is also a Special Adviser to Sheikh Abdullah Bin Bayyah, Peace Forum in Abu Dhabi and Advisory Commission Chairman of the Knowledge Exchange Program (Kep) at the Ministry of Awqaf in Saudi Sarabia. Ceric was one of the 138 Muslim signatories in October 2007 of "A Common Word Between Us and You", a letter addressed to Christian leaders in an appeal for peace and cooperation between the two religions. He speaks fluently Arabic and English.