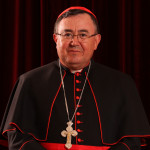 Cardinal Vinko Puljić is the Archbishop of Vrhbosna – Sarajevo. He was born on September 8, 1945 in Priječani near Banja Luka. After finishing primary school, he went to a minor seminary and high school in Zagreb. He studied Philosophy and Theology at the major seminary of Djakovo and was ordained a priest in the Cathedral of Djakovo on June 29, 1970. Pope John Paul II appointed him Archbishop of Vrhbosna – Sarajevo on November 19, 1990 and in 1991 at the tomb of St. Peter in Vatican ordained him Bishop on the Solemnity of the Epiphany, on January 6, 1991. Due to the Yugoslav Wars in the 1990s, he took part in aiding thousands of refugees and exiles, with the efforts of the Church and people. He also called for the respect of the rights of people regardless of race or religion, for the right of each to live in their own home, mutual respect, and cooperation. Cardinal Puljić also took part in multiple talks between Orthodox and Muslim religious leaders of Bosnia-Herzegovina in order to promote peace, and achieved widespread respect among both people and politicians from different faiths. In 1997, he was one of the initiators of the idea and one of the founders of the Interreligious Council in BiH (“Međureligijsko vijeće u Bosni i Hercegovini”). He was its president in several mandates, and currently is a member of the Assembly. From 1995 till March 2002, he was the President of the Bishops’ Conference of Bosnia-Herzegovina, and then again from 2005 to 2010 and from 2015 till today.