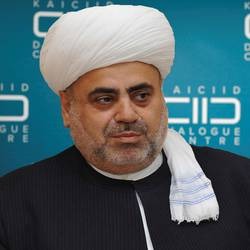 His Virtue Prof. Dr. Allahshukur Pashazade is the current Chairman of the Caucasus Muslims` Board (CMB), Secretary General of BCIC (Baku International Centre for Interfaith and Inter-Civilization Cooperation and Sheikh ul-Islam of Caucasus. Born in 1949, Azerbaijan, he received his religious education in Mir Arab Madrasah, Bukhara, then at Tashkent Islamic University, Uzbekistan, graduating in 1975. Upon his return to Azerbaijan, he held several religious posts. In 1980 he was elected Chairman of CMB and received a title of XXII Sheikh ul-Islam of Caucasus. Career Summary: Sheikh ul-Islam and Chairman of the Caucasian Muslims Office since 1980 Co-chair of CIS Interreligious Council since 2004. Current Secretary General of BCIC Current chairman of the Advisory Council of Muslim Leaders of CIS. Current chairman of the Supreme Religious Board of Caucasian peoples. Senior Fellow of the Royal Aal al-Bayt Institute for Islamic Thought of H.K. of Jordan Fellow of “Taqreeb bayn al Mazaheb” Committee for the Islamic convergence Fellow of “Dar al Taqreeb” Foundation for the Islamic convergence