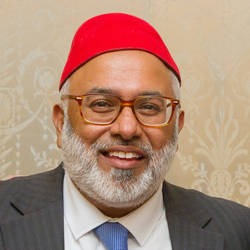 Board Member, The Oxford Trust

Monawar studied Theology at the University of Oxford and holds a Master of Arts degree in Abrahamic Religions from the University of London. He also trained as an Imam under the tutelage of the late Sheikh Dr Zaki Badawi KBE at the Muslim College, Ealing, UK. Monawar is the Founder of the Oxford Foundation, a charity organisation to empower young people through education in the promotion of religious and racial harmony, and good relations between persons of different faiths and racial groups.  He presently serves as an advisor to a number of national charities including the World Congress of Faiths, The Oxford Trust, Three Faiths Forum, , Dalai Lama Centre for Compassion, Prison Phoenix Trust, and NSPCC National Advisory Group on Safeguarding and Muslim Children. Additionally, he is an Honorary Research Fellow at the University of Birmingham. He was made the Member of the Most Excellent Order of the British Empire in Her Majesty The Queen’s Birthday Honours list in 2017.