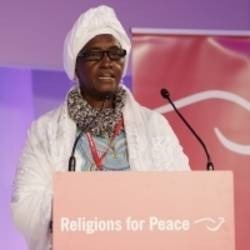 Born in Guinea, Fulani, Mme. Cisse Hadja Mariama Sow has had a distinguished political career of more than 50 years in the field of the promotion of women's rights. She is currently the president of the Union of Oulémas Women of Guinea (UFOG). She is also involved in interreligious dialogue and heads the Coordination Office of the Associations of the Muslim Women of Guinea, where she promotes religious tolerance, religious rights, and women's rights for the Guinean people and neighboring countries. She has worked tirelessly to create an interreligious space for the Mano River communities, as she believes that religious participation and freedom are necessary to consolidate peace. She also fights against religious fanaticism, especially in the Muslim community of her country. At the forefront of the women's movement, she has constantly sought to raise awareness among the Guinean people and to propel Guinean women to the forefront of the African women's rights movement. This made her an important reference to other African countries, especially Francophone ones. Mother of eight children, she still works today despite her age and continues to fight for social cohesion and the emancipation of African women, to encourage the mobilization and awareness of African and Guinean women. Other Positions: - Former National Assembly Member, 1972 -1984, Guinea - Former member of the National Transition Council, 2009-2013 - Co-President, World Council of Religions for Peace - President, National Reconciliation Commission for Human Rights Solidarity (CNT) - Female Coordinator of Faith, Coordinator CRSDP - Ambassador of Peace, Guinea