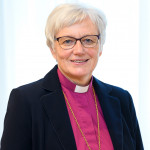 Rev. Dr. Antje Jackelén is the archbishop of Uppsala and primate of the Church of Sweden (Lutheran). She was previously the bishop of the Lund Diocese of the Church of Sweden as well as associate professor of systematic theology and director of the Zygon Center for Religion and Science at the Lutheran School of Theology at Chicago, USA. Educated in Germany and Sweden, she earned her PhD (theology) from Lund University in Sweden. She has published numerous books and articles in English,German and Swedish. From 1999 to 2001, Jackelén was regional director for Europe in the Religion and Science Course Program of the Center for Theology and the Natural Sciences in Berkeley, California. She was also a founding member of the International Society for Religion and Science (ISSR) and president of the European Society for the Study of Science and Theology (ESSSAT). She has served on several boards and editorial councils, such as Zygon and Dialogue: A Journal of Theology and was a member of a Governmental Committee for technological innovation and ethics. Jackelén is council member of the Lutheran World Federation and vice president for its Nordic Region. She also is a Co-president of Religions for Peace. She has become known as a prolific social commentator during her time as bishop and archbishop. She has won numerous awards and distinctions, particularly as an opinion leader. Jackelén has been awarded the Lambeth Cross for Ecumenism for her “work ecumenically on major human and social issues, including the care of migrants and refugees, climate change and the interface of the Church with secularism.” She is honorary doctor at the University of Greifswald; at the Lutheran School of Theology at Chicago; and at Virginia Theological Seminary. She lives in Uppsala, Sweden.