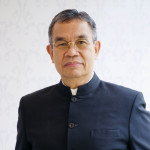 Bishop Efraim M. Tendero serves as Global Ambassador of the World Evangelical Alliance (WEA). He was appointed to this position upon completion of his illustrious service as its Secretary General/CEO. The WEA was founded in 1846 and is now a global ministry representing 140 countries with 600 million constituents. For 22 years Bishop Tendero served as National Director of the Philippine Council of Evangelical Churches (PCEC) which helped grow from 7,000 to over 30,000 local churches. He was also President of the Philippine Relief and Development Services. He initiated a number of national interfaith dialogues on national issues like climate change, anti-human trafficking, clean and honest elections, peace process, and poverty alleviation. He actively represented the Philippines in several interfaith dialogues in Asia, Europe, and the United Nations. The Forum for Promoting Peace in Muslim Societies based in the United Arab Emirates gave him Peace Award together with Al Haj Ahod ‘Murad’ Ebrahim (Chief Minister of the Bangsamoro Autonomous Region in Muslim Mindanao), for their inter-faith peacebuilding contributions in southern Philippines. He is one of founding Director of the Center for the Study of Christian-Muslim Relations in South East Asia. He is also a Co- Catalyts for the Lausanne Movement and the WEA Global Integrity and Anti-Corruption Network. He earned a Master of Divinity with honor from Trinity Evangelical Divinity School in the USA, and was listed in the 1989 Who's Who Among Students in American Colleges and Universities. He received two honorary Doctor of Divinity degrees from Asian Theological Seminary and Febias College of Bible, and Doctor of Leadership degree from International Graduate School of Leadership.