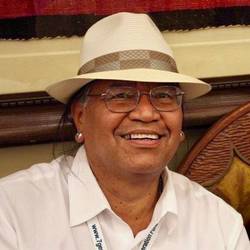 Trustee and Co-Chairperson, Parliament of the World’s Religions

Member and Chairperson, Indigenous Peoples Task Force of the Parliament of the World’s Religions

A graduate of the University of California at Davis and Stanford University, Christopher H. Peters is the President and CEO of the 7th Generation Fund for Indigenous Peoples (SGF), Trustee of the Parliament of the World’s Religions, and Chairperson of the Indigenous Peoples Task Force of the Parliament of the World’s Religions. He joined SGF in 1989, a non-profit organization founded in 1977, dedicated to the identity and the self-determination of Native Peoples and hold Consultative Statue with the UN's Economic and Social Council. SGF strives to recover and maintain traditional connections and relationships between Native Nations and the community, the land and the environment. Peters, member of the Yurok Tribe and a veteran of religious freedom struggles, traditional healing and community development, invested 30 years of his life in the leadership of SGF both domestically in the US and internationally to advance cultural justice and human rights, and protect native spiritual and sacred places.