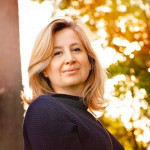 Board Member, The Day After: Supporting a Democratic Transition in Syria

Afra Jalabi is a Syrian-Canadian writer whose interests revolve around religion, language and nonviolence. Jalabi is currently the vice-president of Tastakel Organization and a board member at both the Day After Association and Baytna--two NOGs. She was a signatory of the Damascus Declaration and a member of the Syrian National Council. Jalabi wrote her Ph.D. dissertation on the political dimension of philosophical hermeneutics and power relations at the Department of Religions and Cultures at Concordia University; has a master's degree in journalism from Carleton University, and a B.A in Anthropology and Political Science from McGill University. She worked as a weekly columnist in the Arab press for 17 years with a focus on cultural, religious, and political issues, while also lecturing and participating on academic panels. She was a member of the editorial board of the American academic Journal of Law and Religion at Hamline University in St. Paul, Minnesota, for several years, and more recently she helped develop curriculum on peacebuilding and conflict resolution at the Centre for World Religions, Diplomacy & Conflict Resolution at George Mason University for Syrian activists and refugees in Turkey, Syria, and Jordan.