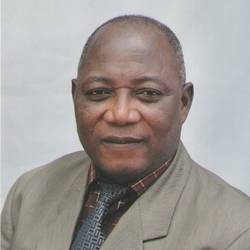 James Wuye is an Assemblies of God Pastor and co-director with Imam Muhammad Ashafa of the Interfaith Mediation Center of the Muslim-Christian Dialogue in the Kaduna State, Northern Nigeria. He is the son a soldier who fought the Biafra War. During the 1980s and 1990s, James Wuye got involved in Christian activism, and for eight years he served as Secretary General of the Kaduna State chapter for the Youth Christian Association of Nigeria (YCAN), an organization representing all Christian groups in the country. During a confrontation between Christians and Muslims in Zongon Kataf, James Wuye lost his right arm, while Muslim Youth Councils Secretary General Muhammad Ashafa lost two cousins and his spiritual mentor. In 1995, the two former opponents decided to work together and build bridges between their respective communities. With this aim in view, he and his Muslim colleague launched the Interfaith Mediation Centre, an organization with over 15,000 members providing interfaith training to young people in schools and universities, to women, religious leaders and political actors. The Centre has thus contributed to defusing tensions in the 2002 and 2005, 2014, 2015 clashes in Sanga in Kaduna, Kaduna State, Yelwan Shendam in Plateau State, Wukari in Taraba State.Subsequently Pastor Dr. James Movel Wuye has facilitated over 150 workhops and presented papers on the need for peaceful coexistence among people of faith within Nigeria and at the global level. Pastor Dr. James Movel Wuye was awarded the was awarded the Alternative Peace Resolution Honorary Doctorate Award By the Board of Alternative Medicine Kalkolta India, 2005. Awarded Honorary Degree of Doctors by the University of Glasgow, 2010 and awarded Doctors of Law, Honoris Causa in Boston, University of Massachusetts, 2012. He is a member African Union (AU) Interfaith Steering Committee member 2017. Biography at at 27.12.17