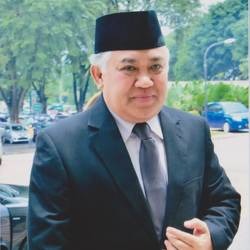 Din Syamsuddin is a Professor on Islamic Political Thought at National Islamic University, Jakarta. Currently he is acting as Special Envoy of the President of Republic of Indonesia for Interfaith and Intercivilizational Dialogue and Cooperation. He was President of Muhammadiyah, from 2005 to 2015, as well as President of Indonesian Council of Ulama during 2014-2015, and now (2015-2020) is Chairman of Advisory Council of Indonesian Council of Ulama. He has been active on interfaith dialogues and cooperations, as he became Presidium of Inter-Religious Council - Indonesia as well as Chairman of Center for Dialogue and Cooperation among Civilizations (CDCC), and Chairman of World Peace Forum based in Jakarta. In international level, he is acting as President-Moderator of Asian Conference of Religions for Peace (ACRP) and Co-President of Religions for Peace International based. In environmental issues, he has been appointed as Member of Leadership Council of United Nations - Sustainable Development Solutions Network (UN-SDSN) in 2015. Then he created Indonesia's Movement to Save Earth (Indonesia Bergerak Menyelamatkan Bumi) and has acted as Chairman of the Movement's Steering Committee. He also initiated and became the Chairman of Movement for a Great Indonesia (Pergerakan Indonesia Maju or PIM). He obtained both Master and Doctoral degrees from Interdepartmental Program in Islamic Studies, University of California Los Angeles (UCLA), in 1998 and 1991 consecutively. He received many awards in national and international levels, among others, Doctor Honoris Causa on Islamic Sciences from Fatoni University Thailand (March, 2017); Japanese Foreign Minister’s Commendation (August, 2016); Lifetime Achivement Award from the World Economic Chinese Forum (2014); Ordine della stella d’Italia - the Star of Italian Solidarity from Italian Government (2013); and World of First Degree (Al-wisām li Addarajah al-Ula) from the Hashemite Kingdom of Jordan. Biography data as at 20.02.18