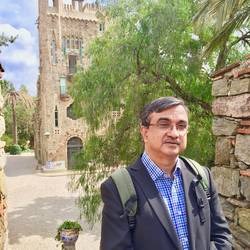 Professor Priyankar Upadhyaya is widely regarded as the pioneer of peace studies in India and holds the UNESCO Chair for Peace and Intercultural Understanding at Banaras Hindu University, in addition to over thirty years teaching international relations and peace studies as well as managing the Malaviya Center for Peace Research situated at the University. He has contributed as a Resource Person for UN University of Peace and at the Henry L Stimson Center, Washington DC and was visiting speaker at the Foreign Service Institute, Naval War Academy and National Defense College in India. He has also taught and carried out research in Political Science & Conflict Resolution in many parts of the world, including Concordia University, Montreal; Ulster University in Northern Ireland, at the Department of Political Science, Karlstad University in Sweden and US Air Force Academy at Colorado Springs. In 2014, Prof Upadhyaya served as the ICCR Chair of Indian Studies at Dublin City University. In 2016, he gave a path breaking speech at the UN Consultative meeting in Geneva on ‘Peace as a process’ in which he highlighted the transformative force of peace and its linkages to sustainable development. Upadhyaya was appointed as PRIO Global Fellow by the Peace Research Institute Oslo in June 2017, having worked closely with PRIO researchers on several different projects beforehand. Professor Upadhyaya holds M.Phil. and Ph.D. Degree of Jawaharlal Nehru University, as well as Advance International Diploma(s) in Conflict Resolution from the Uppsala University, Sweden. He carried out Post-Doctoral Research at London University and the Woodrow Wilson Centre for International Scholars, Washington DC. Biography as at 28.03.18