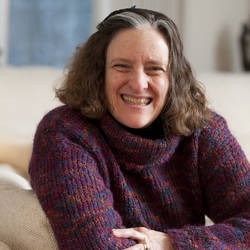 Member of Steering Committee, Multifaith Voices for Peace and Justice

Rabbi Amy Eilberg is the first woman ordained as a Conservative rabbi by the Jewish Theological Seminary of America.She serves as the Coordinator of Jewish Engagement for Faith in Action Bay Area, a multi-faith, multi-racial social justice organization in the San Francisco Bay Area. She previously served as the director of the Pardes Rodef Shalom (Pursuer of Peace) Communities Program, teaching Jewish civil discourse to rabbis, synagogues and Jewish organizations. Rabbi Eilberg also serves as a spiritual director and interfaith activist and as Senior Faculty for The Mussar Institute. Her book, From Enemy to Friend: Jewish Wisdom and the Pursuit of Peace, was published by Orbis Books in March 2014. She received her Doctor of Ministry degree from United Theological Seminary of the Twin Cities in 2016. Previously, Rabbi Eilberg was a co-founder of the Bay Area Jewish Healing Center, where she directed the Center’s Jewish Hospice Care Program, and served as Founding Co-Director of the Yedidya Center for Jewish Spiritual Direction. She lectures nationally and writes  on issues of Jewish healing, spiritual direction, peacebuilding, and social justice. Rabbi Eilberg has taught at United Theological Seminary of the Twin Cities, University of St. Catherine in St. Paul, MN, and the Reconstructionist Rabbinical College in Wyncote, PA, and has directed interfaith dialog programs for the Jay Phillips Center for Interfaith Learning in St. Paul, MN.  She travels widely, teaching the art of listening, dialogue and conflict engagement in venues throughout the country.  In recent years, Rabbi Eilberg has been honored with awards from the Rabbinical Assembly, the New Israel Fund, and Tru'ah: the Rabbinic Call for Human Rights.