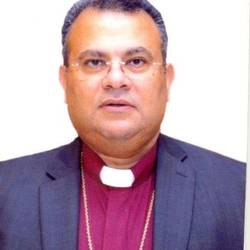 Rev. Dr. Andrea Zaki Stephanous, born 1960, is General Director of the Coptic Evangelical Organization for Social Services and President of the Protestant churches of Egypt. After receiving his Bachelor of Theology from Cairo Evangelical Seminary, Cairo, Egypt in 1983, he went to Coady International Institute, St. Francis Xavier University, Antigonish, Nova Scotia, Canada, where he continued his studies, receiving a Diploma in Social Development in 1988. In 1994, he received a Master of Arts in Theological Studies, majoring in social change, at Eastern University, Pennsylvania, US. In 2003 he received his Ph.D. in Religions and Theology, University of Manchester, Manchester, UK.