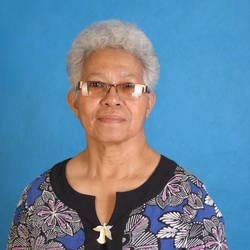 Rev. Dr. Margaretha Hendriks-Ririmasse of the Protestant Church in the Moluccas was dean of the Theological Faculty of the Indonesian Christian University in Moluccas, and until 2013, the Vice moderator of the Central Committee of the World Council of Churches (CC WCC). In Indonesia, Hendriks-Ririmasse helped initiate an interfaith peace and reconciliation initiative in the conflict-ridden Moluccas region, was the vice-chairperson of the Association of Theological Schools, and serves as one of four chairpersons of the Communion of Churches. Margaretha Hendriks-Ririmasse was also involved in the peace talk between the Moslem and Christian communities of Moluccas, which took place in Malino, Sulawesi, Indonesia,. She was one of the signatories of the peace agreement that was formulated by the representatives of both Communities and the government of Indonesia (2002). She was member of the Indonesia delegation to Serbia (2011), Athens (2011), Florence (2011), and Brussels (2011), with a special task to introduce people, including the academic circle in the respective countries, to the peace building initiatives and activities as done in Indonesia. Before that, in 2005, she was involved in a four person team, a delegation sent by the World Alliance of Reform Churches (WARC), to meet with the government and people of Iraq, including the Christian Churches there, to express deep concern and the solidarity of WARC member churches all over the world with the common people of Iraq, at the impending threat of war, which was about to befall Iraq. Another task was to make known to all faction in the country that the Churches are against violence and war. Biography as at 02.02.18