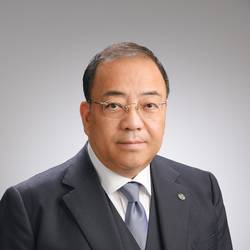 Rev. Keishi Miyamoto is the Spiritual Director of Myochikai, a Buddhist organization in Japan. He is also President of Arigatou International, which was established by Myochikai. His work through Arigatou International, which is focused on building a world where all children can grow up safe and sound, aims to contribute to world peace, the ultimate goal of Myochikai. Rev. Miyamoto inherited his spiritual lineage as a religious leader from his late father, Rev. Takeyasu Miyamoto, the former president of Arigatou International, who extended Arigatou's work by engaging world religious leaders of all major traditions to inaugurate the Global Network of Religions for Children (GNRC) in the year 2000. Under Rev. Keishi Miyamoto's leadership, the GNRC has continued to grow as a platform for interfaith cooperation for children, and three other global initaitives have been launched. In 2004, Arigatou began promoting Ethics Education for Children, and later published, with UNICEF and UNESCO, Learning to Live Together: An Intercultural and Interfaith Programme for Ethics Education. In 2008, Arigatou International launched a global movement of Prayer and Action for Children, and in 2012, the Interfaith Initiative to End Child Poverty. Rev. Miyamoto was the 5th Secretary General of WCRP Japan. He was appointed by the WCRP Japanese Committee in 2007, which tasked him with implementing the Kyoto Declaration adopted in 2006 at the 8th World Assembly of Religions for Peace, which he helped to successfully organize as Secretary General of the WCRP VIII Japanese Secretariat. Rev. Miyamoto also serves as International Trustee of Religions for Peace and as Board Member of the Global Partnership to End Violence Against Children, as well as Executive Board Member of the Federation of New Religious Organizations of Japan (Shinshuren), Council  Member of the Japanese Association of Religious Organizations (Nishuren), and Council Member of the WCRP Japan. Biography as at 27.12.17