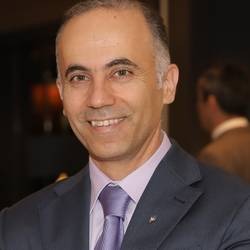 Born in 1971 in Lebanon, Fadi Daou is currently the Chairperson and CEO of Adyan Foundation, where he contributes, in Lebanon and internationally, to the promotion of coexistence, interfaith relations and inclusive citizenship. Adyan’s successful work was recognized in 2018 by receiving the Niwano Peace Award, and in 2013 by receiving the 2d International Prize from the United Nations Alliance of Civilizations Living Together Peacefully in a Diverse World. He personally received in Lebanon the Award “Civilization of Love” (2005). His mission is rooted in and reflects the integration of three distinct dimensions. Firstly on the academic level, He hold PHD in Christian Theology with a MA in Political Philosophy, with an extensive teaching, research and publication activity in Theology of religions, Citizenship, interreligious relations and Geopolitics of religions. He is, with Nayla Tabbara, co-author of “Divine Hospitality: A Christian-Muslim Conversation”, published in English, French, German and Arabic. Secondly, on the policymaking level, he is at the origin or part of many local and international initiatives fostering peace and intercultural understanding, promoting Peace, Inclusive Citizenship, and Religious Freedom. Finally, on the spiritual level, with his ministry as priest in the Maronite (catholic) church, he founded the Interreligious and ecumenical offices; he is also member of the Catholic Commission for interreligious dialogue in Lebanon, and takes part to many local and international initiatives of interreligious dialogue, as being part of the Holy See (Vatican) delegation in its dialogue with Al-Azhar. Biography as at 18.10.17