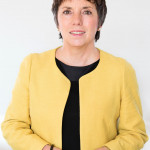 Margot Käßmann was born in Marburg in 1958. She studied theology and was the Secretary General of the German Protestant Kirchentag. From 1999 to 2010 she was Regional Bishop of the Protestant-Lutheran Church of Hanover, and the 2009/2010 Council President of the Evangelical Church in Germany. From 2012 to 2018 she was the Ambassador of the Council of the EKD for the Reformation anniversary in 2017.  Käßmann's work focuses on Religious dialogue, child rearing, poverty, and violence and war. She recieved an honorary doctorate in 2002 by the University of Hannover, and in 2008 she was awarded the "Grand Cross of Merit" for her social commitment. Käßmann is the mother of four adult daughters; She resides in Hanover and on Usedom.