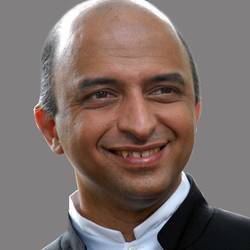 Somaiya Vidyavihar was founded in 1959 with the conviction that modern education has to have its roots in strong values. It is among the largest private educational campus in Mumbai, and has 34 institutions with 39,000 students and 1,500 teaching staff. It provides value-based education alongside quality pedagogy. Mr Somaiya holds a Master’s degree in Public Administration from Harvard University, and an MBA, a Bachelor, and a Master’s degree in Chemical Engineering from Cornell University. He has been contributing to the field of religious studies both at a personal level and at an institutional level. Mr Samir Somaiya is a member of the Council of Religious Leaders, and is the leader of the Hindu delegation for the Congress of the Leaders of World and Traditional Religions, Kazakhstan. In this capacity, Mr Somaiya has delivered many speeches that range from religion and youth, to interreligious dialogue and peaceful coexistence. He has published various academic papers that tackle culture, globalization, individualism and identity. He has also contributed to the creation of a Hindu-Christian Dictionary – Essential Terms for Interreligious Dialogue in collaboration with Pontifical Urbaniana University, Vatican City. Mr Somaiya has established international relationships in the field of Interreligious dialogue. For example, in October 2016, he led a delegation of Indian Buddhist scholars to visit places of Buddhist heritage in China and develop ties for academic co-operation between Indian and Chinese institutions in the field of Buddhist studies. He has also made sure that SVV centers on interreligious dialogue, and holds seminars where prominent figures of the field have participated and shared their knowledge, including but not limited to Chidananda Saraswati Muniji from Parmarth Niketan, Rishikesh, Mahamandaleshwar Swami Vishveshvaranandaji from Sannyas Ashram, Mumbai, and H. E. Cardinal Late Jean Louis Pierre Tauran, Vatican City. Among his charitable activities, Mr Samir Somaiya has contributed immensely to the betterment of the rural community in the neighbouring areas of his industrial units. He has promoted the project “Help a Child” which so far has supported the education of about 6000 children from poor families.