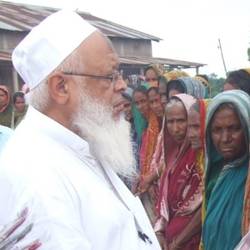 Shaikh Arshad Madani is the son of Maulana Syed Hussain Ahmad Madani, who was the former President, Jamiat Ulama-i-Hind and Prisoner of Malta. He was also Head of Teachers and Professor of Hadees in Darul Uloom, Deoband, Uttar Pradesh, India. Since 2006, Shaikh Arshad Madani has been President of Jamiat Ulama-i-Hind. In 2012, he was elected member of Muslim World League, Makkah, KSA, professor of Hadith in Darululoom Deoband, Saharanpur, U.P., He is member of All India Muslim Personal Law Board. He is also Patron and advisor for several religious institutions in India. As part of his duties and responsibilities, he has travelled widely in India and abroad. The countries that he has visited for participation in seminars and conferences include Bangladesh, Canada, Egypt, Great Britain, Mauritius, Pakistan, Panama, Saudi Arabia, South Africa, United Arab Emirates, United States of America, Zambia and Zimbabwe. The Madani Charitable Trust, which he established in 1997, sponsors religious educational institutions in Punjab, Haryana and Himachal Pradesh. The trust has also founded industrial training centers. Under the umbrella of Jamiat Ulma-i-Hind, Sheikh Arshad Madani is very active in service of humanity. Its scope covers various fields of life especially educational and rehabilitation services. Helping poor and widows, offering financial aids among the students, rehabilitation of victims of natural disasters and the distribution of household items among the needy are main areas of his services. Shaikh Arshad Madani was also Director of Studies at Darul Uloom, Deoband from 1996 to 2008, the same institution where he was appointed a teacher in 1982.