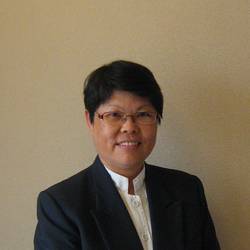 Loh Pai Ling or fondly known as Sister Pai Ling is a lawyer by training, graduated with a LLB degree from the University of London (External), with a Master Degree in Business Administration (Finance) from the University of Hull, UK. Sis. Pai Ling has been serving with Buddhist Missionary Society Malaysia (BMSM) Group of Branches and Sections at the Management Committee of its branch and section as well as at the Central Management Committee for more than 20 years. She was the former Honorary Secretary of BMSM Kajang Branch and was recently re-elected as the Chairperson of BMSM Meditation Section.  Currently, Sis Pai Ling is the re-elected 7th President of BMSM (third term: 2017-19).  The first Lady President after 50 years of inception. BMSM was founded by the most Venerable Dr K Sri Dhammananda Nayaka Maha Thera (fondly known as Late Chief). BMSM has gone beyond Buddhism as evident by its pioneering efforts in fostering religious harmony. Very much through the exemplary efforts of the Late Chief, BMSM became a key organisation in the founding of the Malaysian Consultative Council of Buddhism, Christianity, Hinduism, Sikhism and Taoism (MCCBCHST)(1983).  BMSM is also the founding member of Inter-Faith Spiritual Fellowship (INSaF) (1986) and the Friendship Group Inter-religious Services (FGIS)(2002). BMSM is also represented in the National Interfaith Committee of Malaysia (JKMPKA) since its establishment in 2010. This is a Cabinet-appointed working committee to promote religious mutual understanding and harmony among adherents. Beyond Malaysia - Following the example shown by the Late Chief, Sis Pai Ling, the BMSM Presidents actively participated in the activities and conferences organised by The World Fellowship of Buddhists (WFB) since its inception in 1950. BMSM officially became a member of WFB in 2002 and WFBY member in 2012 as its Regional Centre in KL & Selangor in Malaysia. Other positions: - Member, Malaysian Buddhist Consultative Council - Member, Committee for Promoting Inter-religious Understanding and Harmony Among Adherents (JKMPKA) Biography as at 18.05.18

Freedom of Religion or Belief Shared Human ValuesChildren and Youth