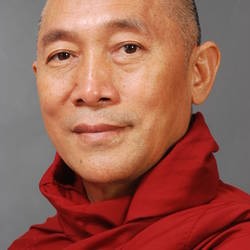 Born in upper Burma in 1948 to ethnic Chinese parents, Master Hsin Tao was left orphaned and impoverished at an early age. Having been taken in by the remnants of ROC military units operating along the border of Yunnan, China, he was brought to Taiwan in 1961. At the age of 15, he was deeply moved by the compassion of Guanyin Bodhisattva (Avalokiteśvara) and resolved to seek the supreme truth and to bring relief to all who suffer. As an offering to the Buddha, he had himself tattooed with the vows "May I awaken in gratitude for the kindness of Guanyin," "I will never rest until Buddhahood is attained," and "Liberating all beings by living in suchness." After ordaining at the age of 25 and making a vow to attain enlightenment, Master Hsin Tao traveled on foot for over ten years, practicing austerities in lonely and secluded locations. Having arrived at the Fahua Cave on Fulong Mountain in early 1983, Master Hsin Tao undertook a fast which was to last over two years, during which time he attained deep insight into the meaning of "Only when all beings are liberated, is enlightenment fully attained." He set up the Ling Jiou Mountain Buddhist Foundation in 1989.He is also known for his efforts in international and interfaith dialogue, especially on dialogue with some Muslim groups. He later founded the Ling Jiou Mountain Monastery in 1983. Through the Ling Jiou Mountain Buddhist Foundation, he founded the Museum of World Religions (世界宗教博物館) in the Yonghe District of New Taipei City, Taiwan, in 2001. He founded the Global Family for Love and Peace in New York, United States, in 2002. He is also interested in interfaith dialogue and currently sits on the Board of World Religious Leaders for the Elijah Interfaith Institute. Biography as at 17.11.17 The above biography narrative is sourced from http://www.mwr.org.tw/mwr_en/xmdoc/cont?xsmsid=0I052375433868891650