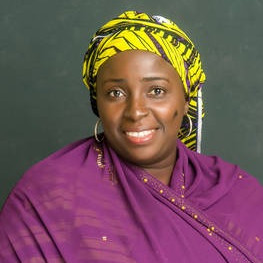 Lantana has extensive experience working in the Nigerian non-profit and peacebuilding sector. Previously, she worked with Search for Common Ground (SFCG) Nigeria managing several projects in the Middle Belt and northeast Nigeria responding to human rights abuses, ethno-religious violence and violent extremism. In addition, Lantana was involved in mediation between pastoralists and farmers in Kaduna and Plateau State and has led many interreligious and inter-ethnic dialogues in Jos, Minna, Maiduguri and Yola. She is actively involved in mentoring women and girls’ participation in peace, security and governance, and was selected by UNWomen Nigeria as one of their Lead Mentors. Lantana currently leads a local women-focused organization known as Women for Positive Peacebuilding Initiative and heads the program design of the Plateau State Peacebuilding Agency. Lantana is a member of the African Union’s Panel of the Wise and FEMWISE, a Network of African Women in Conflict Prevention and Mediation.

Lantana has been involved in many research and evaluations within Africa such as UNICEF’s Analysis of the Situation of Children Affected by Armed Conflict in the Niger Delta and the Northern Region of Nigeria; and the USAID’s Early Warning Response Design Support (EWARDS) in Nigeria and Ghana.

Her motto is “Stand up and get involved, women voices matter”.

Promoting Interreligious Awareness and Education in Schools and Communities in Plateau State, Nigeria

Since 2001, Plateau State has continued to experience intermittent violent conflicts. The definition of the conflicts along ethnic and religious sentiments has fueled tensions and deepening divisions between Muslims and Christians and among tribal groups. To date, hundreds of lives have been lost and severely affected livelihoods and socio-economic fortunes of the State.

The protracted violence has led to the polarization and segregation of most communities along religious and ethnic affiliation within Jos city. Basic social spaces for children and youth have become very narrow. Spaces that hitherto provides children platforms for interactions and shared learning no longer exist or exist minimally for most children. Many children were born and grew up during the long years of violence and have had no opportunity to associate with the “Other.” Many go to exclusive faith-based schools, reside in exclusive communities including access services such as markets, hospitals.

The project intends to target students and teachers from four exclusive Christian and Muslim schools with low experience and exposure to the other faiths. The Christian Association of Nigeria (CAN) and the Jama’atu Nasrul Islam (JNI) will also participate in the activities as a way of ensuring scale-up and sustainability.