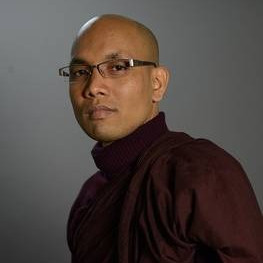 Ven Acinna is a Buddhist monk from Myanmar. He is studying for his doctorate at Postgraduate Institute of Buddhist and Pali Studies, University of Kelaniya in Sri Lanka. He received his L.L.B from Yangon University in 2004 and his M.A (Buddhist Studies) from Buddhist and Pali University of Sri Lanka in 2013. He taught basic Buddhist scriptures to young novices and Basic English Course and Buddhist Cultural Courses to young children and adult free of charge in Yangon from 2005 to 2012. During his studies in Sri Lanka, he has participated in several workshops related to social healing and wellness. He has also been teaching English and related subjects to a group of junior student monks at Myanmar Temple in Colombo, who are earning masters degrees in Sri Lanka. Since 2012, he returns to his hometown every year, in the western part of Myanmar, and conducts workshops for dialogue and teaches English and Cultural courses to children. He is eager to facilitate and promote inter-religious dialogue among young children. He has also founded a library and an education foundation in his hometown for economically disadvantaged children. He is very committed to socio-religious works and to create a peaceful environment within his community, where the Buddhist majority and a large proportion of the Muslim populations of Myanmar are living together. His motto is “Diversity must be a weapon for the ‘Welfare’ of society.”

We will gather at least 25 Buddhist monks from Rakhine state, in which the brutal conflict took place in 2012. Participants will be students learning at a Buddhist institute. We will include in the program individual activities as well as group performances focusing on the topics of religion, identity, pluralism, discrimination, humanity, communal conflicts, reconciliation, etc. Moreover, we will continue with intra-religious dialogue, introducing interreligious; dialogue as well. We predict that their views on religion, identity, race, etc. will promote from their individual thinking to positively broader one, from which inter-religious dialogue can be materialized in the future. After participants are done with the task, they will be thanked and debriefed.