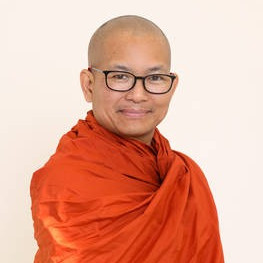 Dr. Ashin Vicittasara was born at North Chinmyitkyin,a small village in the Kanbalu  Township, Sagaing Region, Myanmar. He received his basic and higher monastic education in various Buddhist institutions and went on to study at the  Mandalay Sasana University , Yangon ITBMU and Varanasi SSU India. He was a member of the faculty of Central University of Tibetan Studies (founded by HH Dalai Lama) from 2010 to 2012. In 2012, he returned home to lead Buddhist Educational Activities and join inter-religious peace processes.

He is now the founder and principal of Dhamma Ganga Buddhist Pali College, Yangon, Myanmar, a well-known author of 10 books and several publications, and the host of Buddhist Lecture programs on two state TV stations MRTV and MWD. These programs are immensely influential as sources of guidance for Buddhist communities at home and abroad, and to provide positive role models for youth and the younger generation of religious leaders. In addition to his work as professor and scholar, he participates in many regional, national and international conferences, public talks, lectures and training on Buddhist ethics, peacebuilding , dialogue, conflict resolution and transformation, healing for trauma, as well as Buddhist practices for social cohesion and harmony. He has travelled around the world to over 30 countries including the United States, U.K, EU, and Japan to give Dhamma talks and lead meditation retreats among Buddhist and non-Buddhist societies.

Intrafaith to Interfaith (Buddhist Teachers’ Exploration to Buddhism, Education and other Religions)

This initiative is for Buddhist educators from different parts of Myanmar to
come together and discuss about Buddhist approach to peaceful coexistence
by sharing different perspectives they have on Buddhism and Peaceful Coexistence.

there is a need to integrate social aspects and peace if we want to sustain peaceful coexistence between different religions or stakeholders. The skills such as critical thinking, handling and transformation, communication and dialogue facilitation would be part of the workshop to equip the participants the skills and knowledge in making intrafaith or interfaith or any other dialogue they need to.