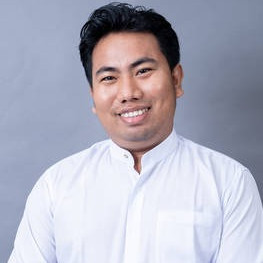 Aung Htay Myint is a youth activist from Myanmar. In December 2014, he co-founded the Siblings organization where he serves as a vice-chairman with the purpose of educating the poor and orphans. He is a civic educator at the Institute for Political and Civic Engagement and a member of Mandalay Regional Youth Affairs Committee chaired by the Regional Social Welfare Minister. He is also an executive committee member at Metta Campaign Youth, working to promote democratic practices in Myanmar and to improve youth participation in nation-building. He believes that everyone can feel safe and happy only when he or she can appreciate the differences, and dialogue is a way to build safe and happy community of diverse backgrounds.

Intra-faith Dialogue; Reflection on Buddist Perspectives relating to other religions

There will be three pieces of training in three different districts such as Meikthila district, Nyaung-Oo district, and Myingyian district in Mandalay Region. In each training, there will be 25 participants (activists, Dhamma school teachers, Youth network, and University students) in its district. The training will last for 3 days. The training will cover the subjects such as Buddhist principles, Identity and introduction to Inter-religious dialogue. After three pieces of training, all the participants will be invited to Mandalay and visit a Buddhist university or Buddhist school, Church, Mosque, Hindu temple and Baha’i Faith Center and have conversations with the responsible person from those religious sites. With the activities above, the objective is to make the 75 participants aware of cultural and religion of their own and be aware of others as well and become better citizens who respects others and accept diversity.