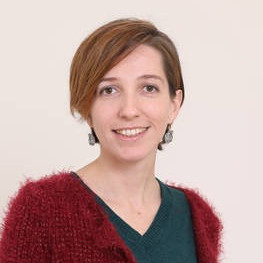 Claudia Giampietro is a a canon lawyer working for the advisory board of the International Union of Superiors General, helping Catholic religious order of women to develop new policies on the protection of minors and vulnerable adults.  Among her collaborative projects with the Catholic Church, the most important are the participation in two World Youth Days as interpreter of Pope Francis’ speeches and the translation of several articles for the International Journal of Theology Concilium. In March 2017, she gave a talk with Archbishop David Moxon – former Representative of the Archbishop of Canterbury to the Holy See and Director of the Anglican Centre in Rome – on the topic of integration as a common goal that brings Christians together. She was selected as member of an international planning committee for a training course on the theology of migration held by the Ecumenical Youth Council in Europe in June 2017. Claudia is a PhD candidate in Canon Law at the Pontifical University of St. Thomas Aquinas in Rome and communications officer for Voices of Faith (http://voicesoffaith.org ), a network of inspiring women from all over the world working together for a thriving Church. She believes that in mediation it is very important to pay attention to language, and her motto is a quote from a poem by Ruth Bebermeyer: “Words are windows, or they’re walls. They sentence us, or set us free.”

A Vademecum of Dialogue for Future Priests

In an era where the issue of migration and different religious backgrounds of migrants is of great concern for many people, on 9 April 2018, Pope Francis issued the Apostolic Exhortation Gaudete et Exsultate and at Nos. 102 and 103, which he focused on welcoming the stranger “like Christ” and to meet the poor and pilgrims with “the greatest care and solicitude”. Care and solicitude should be expressed with particular attention towards different cultures and religions of our neighbors, and the example set by our pastors in the Catholic Church is extremely important. Several times, discussing with priests, I’ve noticed a worrying hostility and prejudice towards other religions, which are mainly rooted in ignorance and indifference. I understood the importance to face this problem in the work of priestly formation, dedicating a space of the internal schools in Catholic seminaries to the acquisition of skills in dialogue. Therefore, I thought about writing a vademecum of dialogue for future priests in Italian and English with the skills learned through the formation as KAICIID Fellow, and at the same time contact trainers in Roman seminaries and suggest working together to pursue this goal. This project would also include the creation of a website. I would like to present the results of this initiative at the next Parliament of the World’s Religions.