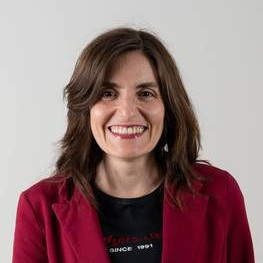 Ana has been a Soka Gakkai Buddhist since she was 21 and studied law at university. She works at Alcalá University as a human resources officer as well as a researcher and is currently finishing her PhD. She is the academic secretary at the Daisaku Ikeda Institute of Education and Development, a Univesity Institute of the University of Alcala, linked to education, where she investigates Daisaku Ikeda’s theory of value creation and the importance of dialogue to resolve situations. Daisaku Ikeda is a philosopher and educator of Buddhist origin who has created a whole pedagogical system based on the theories of his teachers Makiguchi and Toda. He is Ana’s life mentor.

First of all, four young people stayed in Madrid, two of them Muslims and two Buddhists, the cameraman and me. Together we traveled to the Buddhist center of Soka Gakkai in Rivas, the young Buddhists showed the center and explained what Buddhism is to the young Muslims. Then we all went to breakfast together and later we traveled to Fuenlabrada by taxi to see the Fuenlabrada Mosque, there the person in charge of the Mosque explained what Islam is and how it is practiced. We all ate together and then we did the interreligious dialogue in a classroom of the mosque. The interreligious dialogue began with a group dynamic on identities and active listening and then we began to develop the theme of hate crimes against Muslims and the LGBTQI community. The four young people met and shared impressions, and changed stereotypes about the other religion.

Freedom of Religion or Belief Freedom of ExpressionMigration of RefugeesDemocracy, Social Cohesion and Citizenship