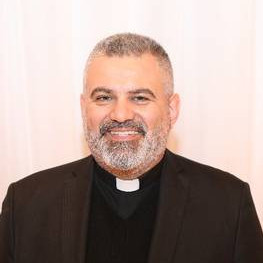 Father Rony Bou Gharios, a priest since 2005, has been appointed as parishioner in a number of parishes in Lebanon and abroad. He holds a graduate canonical degree and a master’s degree in theology from the Catholic University of Angers, France, and a B.A in theology from the Pontifical Faculty of Theology of the Holy Spirit University of Kaslik Lebanon. He attended several training courses in mediation and accompaniment, planning and implementation of accompanying. As a result, he was able to perform pastoral duties in various parishes and dioceses in Lebanon and abroad, enriching his pastoral career as chaplain with young people in Lebanon.

He participated in forums and conferences on interreligious dialogue, promoting coexistence and living together. He also participated in the “Religious leaders in the service of society” in cooperation with Adyan Foundation which promotes cultural and religious diversity among individuals and groups at the social, political, educational and spiritual levels.

Training and first meeting of eight families – Second meeting and workshop for the same group of families – Competition of preparing families and participation of the parents and students of the city of Beirut…
Proposed Program:
Three meetings divided in:
(The first meeting: 3 days), be a time of acquaintance, upbringing and dialogue and rapprochement between families.)
The meeting consists of special times for children, for mothers, times for parents, couples’ times, and times for the whole Families together.
Second meeting: two days: . On the first day there will be dialogue sessions – in the afternoon, a preparatory workshop for joint activity and work between the families and their families. The second day is a tour of the group, in order to activate the bonds of friendship between families. The second meeting concludes with the division of the joint work
Participants, to urge them to communicate and meet together between the second and third meetings
The third meeting is the day of joint work. The proposed work is a contest – Rallye Paper, which includes a large number of residents of the region and students Schools, is the organization of the family group. The competition aims to be a recreational and educational activity, centered on the subject of cultural dialogue
The contest ends with the announcement of the results and the distribution of the prizes
Timeline: August – October 2019