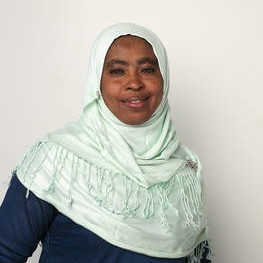 Dr. Habibat Oladosu-Uthman is a lecturer in the Department of Arabic and Islamic studies of the University of Ibadan, Nigeria. She obtained her PhD in Islamic thought and civilization from the International Islamic University of Malaysia in 2011. Her area of competence includes comparative religions, Christian-Muslim relations, cultural criticism, Islam in West Africa and Islam and Gender studies. Since her employment by the University of Ibadan, Dr. Habibat has carved a niche for herself in the areas of teaching and community service. She is currently one of the focal persons at the University of Ibadan Gender Mainstreaming Office and member of many administrative committees. During the past five years, she has served as teaching consultant to the Dominican University at Ibadan. Her vision is to build intercultural and inter-civilizational peace and harmony all around the world.

Her motto is “If He had willed, He would have made you one nation.”

Engaging the Nigerian Students in Peace-Making Through Dialogue

The University of Ibadan has been chosen as the project location for the following reasons. The University prides itself as a multi-cultural and multi-religious campus and unarguably the first in the West Africa sub-region. As a result of its diversity, the University recently has witnessed incidences of religious conflicts and disturbances among its student population most of whom represent different religious persuasions in the country. The University of Ibadan campus has also experienced, of recent, the evil effects of hate speeches from a section of religious leaders outside the campus most of whom have followers on campus. These religious leaders are known for their constant attempt to monopolize God, the Ultimate Reality. They are known for conducting themselves as ‘owners’ of the land while others are subordinates. Consequently, lecture rooms and theatres have become battlegrounds where students display their biases/prejudices and perceptions of the Other.
This project, therefore seeks to bring together students from three areas of studies a) Arabic and Islamic studies, who are predominantly Muslims; b) students from the Department of Religious studies who are predominantly Christians and; c) Students from the Faculty of Law (Muslims and Christians). While participants from both the departments of Arabic/Islamic studies and Religious studies would benefit the training program with commonalities in Islam (the Quran) and Christianity (the Bible), participation of students from the Faculty of Law is designed to expose the participants as a whole to perspectives from the Common Law on peace building and the protection of human rights within the University community in particular and the Nigeria nation in general.