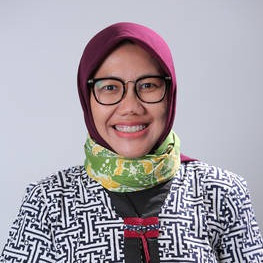 Programme Manager for Environment and Climate Change, The Disaster and Environmental Institution of Nahdlatul Ulama

Hijroatul is currently a programme manager for environment and climate change at LPBI-NU – the Disaster and Environmental Institution of Nahdlatul Ulama. After completing her master’s degree in at Leiden University with a thesis on Islam and ecofeminism, she joined LPBI-NU, where she initiated the ‘Pesantren Hijau’ (Green Islamic Boarding School) programme that introduced an environmentally friendly culture to pesantren (Islamic boarding schools), which won her the Australia Awards Indonesia, AGS (Alumni Grant Scheme). Within the ‘Pesantren Hijau’ she also introduced an interfaith dialogue approach to addressing ecological issues called ‘eco-peace’ by bringing NU students together with non-Muslim students to discuss environmental issues. Her initiative on using interfaith dialogue to address environmental issues was influenced by her nearly ten years of experience working in an international NGO where she worked alongside the issues of peacebuilding and conflict management. Here she worked as a programme officer for peacebuilding programmes, which targeted young people using a diversity and interfaith dialogue approach. Apart from being busy as a programme manager for environment and climate change, she is also listed as a national Board member of Fatayat Nahdlatul Ulama, the largest religious-based young women’s organization in Indonesia – one of her responsibilities is as a community relation for interfaith women’s organizations.

Indonesia, as a country with a solid religious background, most of the population bases their daily activities on religious traditions. However, these religious traditions and values have not been able to build environmental friendly habits massively. In fact, every religion has powerful teachings related to protecting nature. In responding to that problem, the Eco-Peace program was implemented to produce interfaith teachings related to protecting the environment as well as presenting good examples of religious leaders in protecting the environment, which will then be disseminated through writings and videos. This program was implemented in three activities models, all of which have their own goals and achievements. 1. Eco-Peace Workshop This activity was a series of online sessions discussing the environment from interreligious perspectives. 2. Eco-Peace Writing and Content Creative The activity was a series of creative writing and video workshops regarding the environment and religious issues. 3. Eco-Peace field trip. This activity was conducted by visiting churches and Pesantren virtually. Both institutions have used an environmental approach in their daily religious activities. The participants were 50 students in 16-20 years old who passed the selection. Participation was considered based on a representation of religion, gender, region, as well as skills in managing environmental issues.