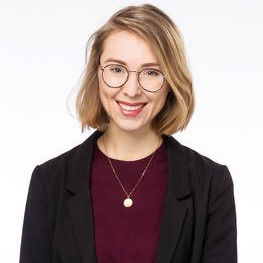 Jana Jakob is a project officer at the Swedish government agency for support to faith communities, where she is mainly responsible for the agency’s educational and capacity building work, as well as special government assignments concerning Swedish and EU-elections. Previously, she worked for the municipality of Stockholm in a democracy project and the Friedrich Ebert Foundation in Hanoi and Berlin.

Jana Jakob is a political scientist, with a Master of Theology in peace and conflict studies from Uppsala University. She has for many years been engaged in interreligious dialogue both nationally and internationally – i.e. as lecturer and trainer at the interreligious organization Tillsammans för Sverige, co-founder of the girls’ organization Soul Sisters and organizer of Scriptural Reasoning. In 2015 Jana became A Common Word Among the Youth Fellow and has since then been actively engaged in the global initiative. Jana is focusing particularly on IRD, women’s rights and intersectionality.

Today, there are few interreligious meeting places for women in Sweden. At the same time, it is exactly
this group, which often struggles with similar challenges of double discrimination from both mainstream
society and their own faith communities. This initiative aimed at creating a safe and empowering space
for women of faith, while breaking Stockholm’s growing spatial and societal segregation. In turn, these
border-crossing relationships counter prejudice and foster understanding, tolerance and integration.
Thus, the benefits of interreligious relations are not only relevant on an individual, but also on a societal
level.
During one day we worked with interreligious dialogue (IRD) and empowerment through exercises and
art – strengthening participants’ identities, sisterhood and religious literacy. During the day, we
interweaved dialogue exercises and training with creative ways of expression. Art was an excellent way
to open a space for difficult dialogue. This was something which has previously not been done in
Sweden (to my knowledge). Through creative ways of expression, we could approach issues, that might
be hard to describe in words. Even though we had a good representation from different religions and
denominations, we had unfortunately no Jewish participants. To compensate for this miss, we
organised a complementary visit to Stockholm’s new Jewish museum, where we gave the participants
the chance to learn more about Jewish life and history in Sweden. The visit was rounded off by a
seminar of a lady who had escaped persecution in Nazi Germany by being adopted to Sweden as a child.
Finally, a small sum of the budget was used for refreshments at dialogue night, where we tested the
ABCD-method, which we already successfully used during the art day, but modified it to read religious
texts. The women appreciated this method, which we will now take up into our “toolbox” and develop
further.