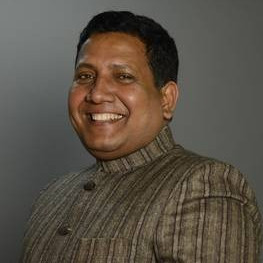 Dr. K M Baharul Islam is a Professor and Chair of Communications at the Indian Institute of Management, Kashipur (India). Since 2007 he is working introduce interfaith dialogue among the students of Islamic faith-based schools (Madrassa) in North East India. It started with a group of 71 Madrassa leaders who took up the challenge to use interfaith dialogue both as a means and end to achieve peace and modernization of Madrassas in the region. It was followed by a mainstream program called Minorities Initiative for Learning, Advancement and Partnership (MILAP) funded by The British High Commission in India. The project created a network of religious teachers who are trained to propagate the message of peace as enshrined in various religions through their teachings and preaching platforms. He also serves as Director of the Interfaith Dialogue Programs with PFI Foundation India. He holds an LLM degree from University of Strathclyde (UK). He also has B.Ed., MA, MBA, PhD (English) and Post-Doctorate degrees. He has earned his second PhD from Assam Don Bosco University, India working on Transitional Justice and Peacebuilding in Post Peace Agreement Societies. Dr Islam has published widely, covering subjects like Women’s Rights, Media, and Education Policy. He strongly believes in ‘Learning to Live Together’ philosophy as his world view. In 2011, he was trained as a master trainer on the subject of interreligious dialogue by the Arigatou International and Global Network of Religions for Children in Colombo, Sri Lanka.

The project aims to develop a basic training course on IRD for the Madrassas in India through a joint consultative process among various faith-based educational institutions. It will finalise the curriculum through a test run the course in a few Madrassas thorough participatory action research. In the long run, the project envisages adoption of the IRD Foundation Course by the state government and Directorate of Madrassa Education for implementation among the 600+ state funded Madrassas in Assam (India).

The main objective is to develop a model “IRD Foundation Course” for the undergraduate level students of universities in India and to launch it in two Indian universities. In the long run, after successful implementation in two universities, the project aims to get it adopted at the national level by the Universities’ Grants Commission of India as a core course for all undergraduate students in the country across the disciplines.