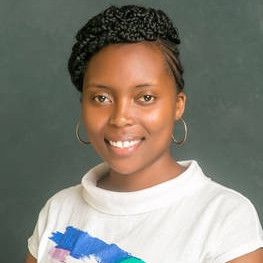 She has been involved in efforts to strengthen capacities of different stakeholders in promoting peace in affected regions of Kenya such as the coastal area. Through her organization, Impact Communities, she facilitates efforts to counter radicalization and violent extremism among the vulnerable youth in her country.

She has also been involved in peacebuilding and electoral process through raising awareness and promoting peace initiatives. She finds pleasure in voicing the concerns of minorities and marginalized people in her society especially through online platforms.

Mercy believes in protection of fundamental human rights, respect for religious beliefs and the freedom to enjoy one’s rights in a responsible manner. For her, interreligious and inter-cultural dialogue is a means to promoting equality and achieving a cohesive society.

Following the Garissa university attack in 2015, there has been general mistrust among students. Suspicions are mainly targeted against one religious group, mainly the Muslims, where they are seen to be more likely to join the terror group responsible for such attacks. On the other hand, the topic on IRD remains largely a new topic among students in the universities.

The initiative aims to counter this mistrust by raising awareness on IRD through online platforms popular among the students, in this case; Facebook. It is estimated that over 90% of students in Kenya are active Facebook users. The initiative will involve the five universities/colleges in my community. It intends to spread awareness on IRD through simple messages displayed on placards and motivate them to carry on IRD in their communities/religions.

The competition will be inter-university where religious group leaders (Muslim, Hindus and Christian Union) from each university will come together and display the messages where the most popular (through likes) ends up winning the competition. All the participants will then converge for a price giving workshop addressed by an Imam and Pastor who will address the issues raised on the baseline survey and also present the gifts.

The initiative will focus on training university students on training university students on the concept of inter-religious dialogue to counter any misconceptions on what it is and how they can replicate it in their society and school settings. The initiative will be in a two-day phase where the first day will mainly be training while the second day the participant will participate in discussion with religious leaders on IRD. It will have a particular attention to religious group leaders in the universities and some sessions will be handled by notable religious leaders. The participating students will be drawn from all the religious groups present in the partnering institutions and communities.