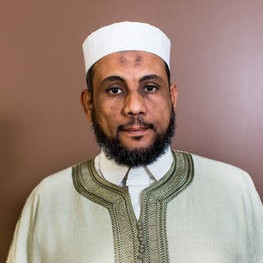 Mohammed Issa Abu Nujila is a lecturer of Arabic and Islamic studies at the University of Benghazi and a member of the League of Libyan Ulema.  He is an Egyptian academic who holds a master’s degrees in science and Arab legitimacy. He has been teaching for 25 years, including 10 years at the university.

Abu Nujila served as Head of the Department of Arabic and Islamic Studies, Faculty of Education, at the University of Benghazi from 2011-2013. In addition, he was the Chairman of Curriculum Development. Moreover, he is a founding member of the Faculty of Islamic Studies of Thought in Benghazi, chairing the Scientific Committee since 2012.

Abu Najila has authored several books, including: The Globalization of Moral Values, and The Flag: Bounty and Controls. He is interested in education and interreligious dialogue. He also conducts research on religious texts and analyzes them scientifically to highlight the universal innate values ​​of humanity.

His motto is: “Honesty is key, and dialogue is the path of reform.”

At this time in which extremism is expanding, and disputes and conflicts between human beings and even among the people of the same country, efforts should be concerted in order to spread correct and balanced thought, correct misconceptions, and immunize young people from exploiting their identities and enthusiasm in battles that only serve the enemies of humanity and impede construction. and hinder development.
For this reason, this initiative that I present comes as a building block in the cultural knowledge building for our youth. It is a training course for a segment of young people that seeks to achieve a set of goals and invests activities that contribute to building community peace for early prevention; By dismantling the causes of conflict and conflict, and education for peace, peace activities of all kinds are adopted: contractual, structural and transformational. The idea of ​​the initiative topic is: To state the importance of identity of all kinds, and how can we make a positive investment in it, so that it becomes an immunization? And how can we dismantle the means of its negative employment in the manufacture of terrorism and fueling conflicts.