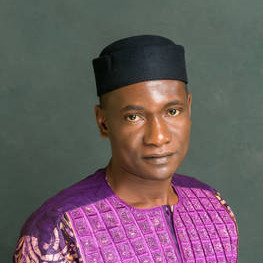 Born to a Christian mother and a Muslim father, Ougba experienced religious diversity within his own family. His father taught him how to treat the Other as a person, not an object, so Ougba understood the importance of humanism and fraternity at an early age.

Ougba is the Vice President of the Plateforme Interconfessionnelle de la Jeunesse Centrafricaine, a Central African interreligious youth network. He also works as a social mediator. He wants everyone to become an actor for peace, to surpass tolerance and strive for fraternity.

His motto is “Do for others what we would like them to do unto us.”

For nearly two decades, the Central African Republic has been experiencing recurring military-political crises that culminated in the 2012-2014 conflict, impacting the stability of the country and weakening all social strata. Intolerance and mistrust towards its neighbor of opposite religion have undermined the foundations of living together in Central Africa. A climate of mistrust has set in, undermining membership of a specific religion. A confused conflict is gaining ground in Central African territory led by emblematic figures claiming to be representative of Christian or Muslim religion and fighting for the diversified interest of each religion. This situation has undermined the stabilization of communities and the respect of the principles of religious protection designed to take into account religious and cultural neutrality in any conflict whatever its level of degradation. Religious leaders, women, children and old people perished in this conflict. It is enough to belong to a religion to be the target of a militia of opposite religion. Trust no longer exists and citizens among themselves cultivate a climate of hatred and stigmatization. Rumors have gained the upper hand, regularly undermining efforts for peace and social cohesion. Even though the threats of inter-religious conflict have been felt for several decades, we can not help believing that the political struggle and the race for the sharing of the Central African subsoil have only worsened the situation.

Therefore, the return to peace, trust between communities and peaceful coexistence must be the subject of sustained promotion efforts by national actors, and local and international partners. Faced with the growing need to strengthen social cohesion and reconciliation initiatives in the country, this initiative wishes to engage in reflection and discussion (dialogue) in order to find the appropriate responses.]